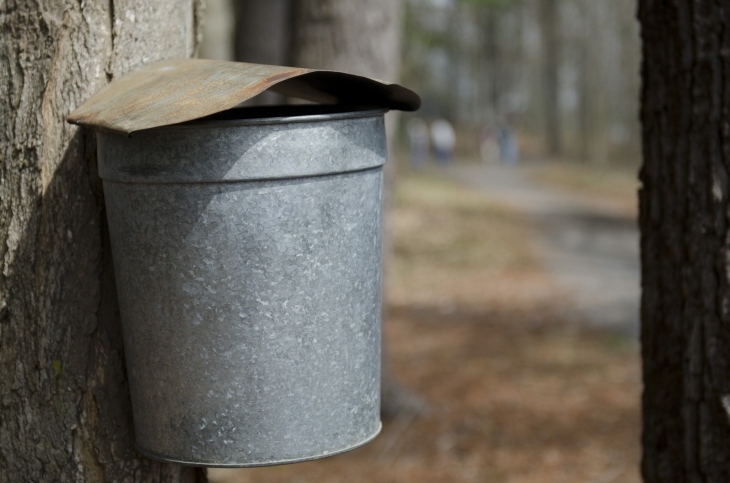 I don’t know what put the idea in my head, but I assume it was one of my father’s stories about making maple syrup as a teenager. Or maybe it was simply that it allowed him to buy a nice car in his teens. Regardless, as a teenager myself, I pressured him to dig out the old aluminium buckets with covers and metal spigots so I could give it a go myself.

The maple syrup process has changed a lot since my father’s day, with evaporating tanks and lines from the trees and vacuum pumps. Instead of any of that, every evening before milking I emptied buckets of sap into teat dip barrels that I drove around our property. Every few days I’d light a big fire by our horse barn and boil down the sap in the large metal pan my father had made in shop class.

The Native Americans of the Northeast had long discovered maple syrup before the first white settlers arrived. According to some legends, a chief threw his tomahawk into a maple tree outside his longhouse, where the sap happened to collect in a bucket on the ground. The next day his daughter used the sap to boil his venison and discovered a sugary liquid. The Algonquians, in particular, seasonally harvested maple syrup. They dropped hot stones into the sap to make it more concentrated, or allowed it to freeze overnight and removed the top layer of ice. European colonizers of North America began auguring holes in the tree and collecting the sap in wooden buckets. Before the Civil War maple sugar was often used by abolitionists, since most of the cane sugar and molasses at that time resulted from southern slave labor.

In the 17th century dairy farmers started tapping trees to earn additional income before spring planting. I, too, probably had ideas of grandeur concerning all the things that I could buy with a good run of sap. After a few years I wouldn’t only have a truck, but maybe a nice truck. Maybe even start saving for college. The syrup I came out with, however, wasn’t going to get me anything. It was watery and black as night—and sometimes had a hint of diesel fuel where I might have gotten too aggressive in stoking the fire and spilled some into the pan. All the batches of my two years in the syrup industry sat in glass jars in the pantry. Before long I found the bottle of maple syrup my parents had bought and hid. Before long I started using it too.

The long, patient process of syrup making was not necessarily without its excitement. One early spring day was snowless and unusually dry, especially for that time of year. My father had expressed hesitation about starting an open fire under such conditions, but I reminded him that it had been a couple days since my last batch, and if we didn’t boil soon the sap I had been collecting would probably spoil. We set a few shovels around the pan as a compromise. I had, at least, never heard of a brush fire ever starting in our area, especially not that time of year.

I’m not sure what we were talking about when the first spark jumped into the dead grass. A flame crept along the ground. My father had two broken fingers with pins in them from a basketball injury and wore a bread bag over his hand to keep them dry. I know what we kept talking as we grabbed the shovels and tried to snuff it out, if only to downplay any panic that was setting in. A gust of wind picked up and spread the fire around our feet. Our flailing shovels and my father beating the ground with his coat did no good. The flame was heading towards the horse barn and had plenty of dried weeds and brush to make it there. I ran to find some 5-gallon buckets to haul water out a small creek in a nearby ravine. There wasn’t much flowing in it during the best of times, and with the recent lack of rain or snow, most of what we threw on the flame was mud and stones. My father’s bread bag got trampled into the ground as we ran up and down the bank with the buckets.

When it was over we turned the buckets upside down and sat on them, heaving. “Let’s wait until next year before we tell anyone about this,” he said.

In the end, my participation in the maple syrup business would span two seasons and a lot of dark mason jars that tended to slowly disappear from storage without being consumed. My compensation would have to be getting to stare into a fire for long hours, which is probably better for a teenager than a new vehicle anyway. Tapping spigots and draining aluminium buckets was a way of getting to experience an older way of things. Perhaps, in the least, it allowed me to better imagine the past, and more specifically my father’s past. It was something we could have in common in our adolescence, and a way to bandy a few memories between us. Perhaps that was enough to make it a sweet success.

Burdened with looking after a mute boy, who the villagers believe to be cursed, the aging farmer refuses to yield in the face of adversity. He will do anything, at any cost, to keep hold of his farm and the child. This dark and lyrical debut novel confronts an apprehensive rural community caught up in the uncertainties of a rapidly changing world.
–
A novel like no other. Mythic and intimate, original yet recognisable, the barbed wire prose of Ryan Dennis draws down storm clouds and grey crows over a world at the end of its tether. Half mad, wholly inspired and completely brilliant.’
a
Mike McCormack – author of Solar Bones and winner of The Goldsmiths Prize
history of maple syrupmaking syruptapping tree