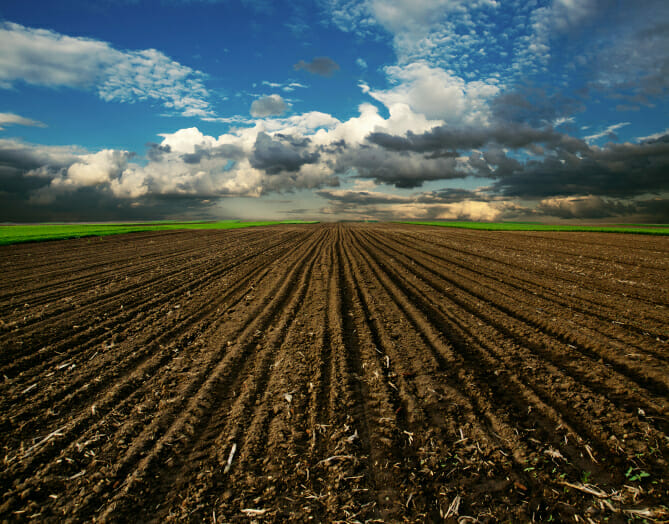 Dragging our moldboard plow through the fields in the spring always tended to turn up more than just the soil.  Sometimes there would be the lost neck chain of a cow that got scraped into the spreader, or parts of a deer carcass turkey buzzards might have pulled off the road.  Every once in a while I find a wrench that I left on top of the plow last season when I stopped to put new bolts in a share.  Sometimes I would unearth a coulter from an old plow my grandfather must have used, or dig up a rusted hammer or wrench that he must have forgotten as well. Such discoveries make the past feel a little closer.  It’s a reminder that the piece of ground I’m working has seen a lot.

When I was younger I always checked the rocks I had to carry off the fields, just in case they might be dinosaur fossils.  The closest I ever came was crinoids, a prevalent sea plant dating back to when the area was under an ocean, and a very common fossil.  One Michigan farmer, however, had a little more luck.  James Bristle was laying a drainage pipe in his soybean field in 2015 when he came upon what he thought was a bent fencepost.  Instead, it turned out to be one of the most fully-intact woolly mammoths found in the region.  The animal dates back to between 11,000 and 15000 years ago, and is believed to have been butchered by humans and kept for later.  It is thought that natives at that time often stored wooly mammoths in ponds as a way of preserving them.  Three boulders were found next to the mammoth, suggesting it may have been anchored.  Bristle donated the remains to the University of Michigan, where it is now called the Bristle Mammoth.

Around the same time a farmer in Shropshire, England found himself living out the plot of a Dan Brown novel.  What seemed to be a rabbit hole ended up being the entrance to a cave used by the Knights of Templar 700 years ago.  Pillars, fountains, figures and other insignia were carved out of the sandstone in an area of the Caynton Caves network.  The order was originally created by the pope in 1129 to protect pilgrims visiting Jerusalem.  They grew rapidly in wealth and power, and became famous for their skillful fighting during the crusades.  King Philip IV of France was deeply financially indebted to the organization, and to prevent having to fulfill his obligations, had many of them beaten and tortured into giving condemning false confessions, burning some of them at the stake.  Under pressure from King Philip IV, the pope disbanded the Knights of Templar in 1312.  In what ways they may or may not have continued to persist is often the debate of conspiracy theories.  Even when they were officially sanctioned by the church they were known to be secretive and illusive, as evidenced by their cave in Shropshire remaining hidden for 700 years.  Little is reported about the farmer who discovered the cave on his land, although I’m sure it gave him plenty to think about while doing fieldwork the rest of the summer.

In China, not only is the ground steeped with thousands of years of culture, but it was up to farmers to protect that history.  For three millennia, Chinese nobility have followed ancient burial traditions that include entombing the deceased with objects useful for the afterlife.  Many of the artefacts inside are now worth thousands to millions of dollars on the black market.  Traditionally, local farmers were charged with safeguarding the tombs on their land, the responsibility sometimes being passed down through many generations.  In modern times, as farmers were forced out of business or chose to move to cities for better opportunities, many of these ancient tombs were left vulnerable.  According to the New York Times, by the 1980s tomb-raiding had become an epidemic, and experts estimate that 80% of Chinese tombs have already been emptied.  As the nation’s farmers began to lose their connections to the land, so did the nation begin to forfeit some of its irreplaceable past.

There is often talk about how long a farm has remained in the same family, but sometimes the ground reminds us that no matter where we are, there is a long and diverse history that predates us.  People toiled on the same ground long before we have, whether battling prehistoric mammals or conducting secret rituals.  It’s both fascinating and intimidating to know that we’re a small part of a long story that will keep going after whatever might be left of us will be in the dirt.