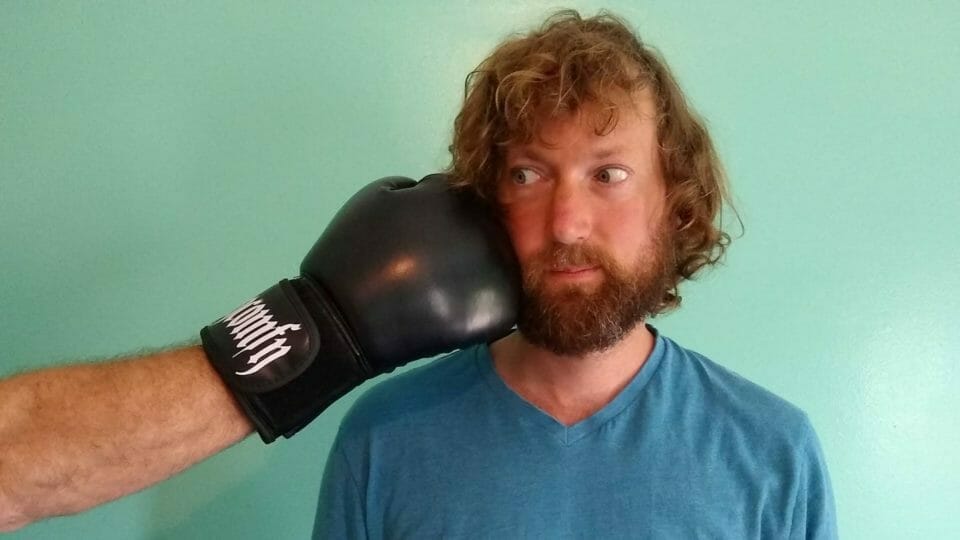 If there ever was a movie that captured the American spirit, it was Rocky. A no-name working class guy from the streets of Philadelphia goes up against the heavyweight boxing champion in the world. Almost 40 years later, the theme music still holds an iconic status in our culture, as do the images of him running up the steps of the courthouse or yelling “Yo Adrian!” into the night. There’s seldom been a chicken that I’ve seen and haven’t thought “If I can catch this thing, I can catch greased lightening.”  You can’t beat the underdog story. The end of the movie always leaves me crying. “He just wanted to finish,” I would sob. “He knew he couldn’t win. He just wanted to finish.”

One of the benefits of being in the university system in Ireland is being able to join sports clubs for free. Last semester, never having done it before, I played squash. I appreciated the new experience, but quickly grew bored when I realized that it was mostly business majors hitting a rubber ball against the wall. This semester I was looking for something a little tougher—something I never thought I would do, but could give me skills I could use in life. Giving in to a whim that wouldn’t go away, I joined boxing.

The training started off mostly focused on fitness, each time with new instruction on how to throw or defend a particular punch. There were about 40 of us, the coach correcting our technique as we completed drills. The more footwork and method we learned the more all those boxing movies came to life, as the way they moved and held their hands started to make sense. I was the only one in my thirties, the rest undergraduates. A strange notion started to take shape in my head. Wouldn’t it be great to have an actual fight?  How cool would it be to start boxing at this age and actually get to stand in the ring, at least once?  It would be months of training, but I wouldn’t care if I won or not. I just wanted to finish.

The idea of school combat is to spar at 60% power in order to simulate a real experience in the ring while working on your technique. You wear gloves, but not head gear, and are matched up with someone of your general height. I’ll admit, I found it somewhat problematic to hit someone in the face that I wasn’t competing with or at least mad at, even if it didn’t hurt much. I know this, because once I was matched up with a big slow kid who seemed like a nice guy, and instructor kept yelling at me to “hit him in the face! Hit him in the face!” so he could learn to duck.

One session I was matched up with a tall kid, much younger than me. I didn’t know much about him, other than he had been boxing for a while. In the first three minute drill one boxer would be on “all-out attack,” while the other could only defend, not allowed to hit back. After the three minutes, we would change. The kid offered me to attack first. I did my best, trying to be conscious of my form, and to not swing too hard. The few times my glove did make contact with his face I apologized, although at 60% power they did little more than remind him to keep his hands up. The bell rang. We took a second to adjust our mouth guards, and then switched roles.

Here’s the two facts that explain what happened next: 1). The kid went at me with 100% power, and 2). It’s really hard to go three minutes without being hit, especially when the other boxer is experienced. Within seconds he landed one on my jaw that sent me reeling backwards. Everything turned hazy. I didn’t fall, but I didn’t have my wits either. That didn’t bother the kid. He jumped on me and turned me into a human punching bag. My mind couldn’t quite calculate how to duck or where to put my gloves to block. I tried to keep moving, in and out of other pairs sparring, but the kid hunted me down and kept swinging. Later, I would think that if I knew the rules the kid would play by I would have tried to drop a hard one on him when it was my turn and maybe that would have slowed him down, but hindsight didn’t matter at that point. When the three minutes were up there were a succession of other three minute drills in which I was allowed to hit back again, but by then there wasn’t enough left of me to matter. Regardless, he kept swinging. At one point I tried to play to the Rocky music in my head to draw inspiration, but the only thought I could have was, “I just want it to finish.”

I knew the product of our sparring was not pretty because once the drills were over I saw everyone looking at me and wincing. Someone asked, “Man, how old are you anyway?”  Another guy tried to be kind: “Well, good on you for trying boxing so late in life.”  For the next week I would have two black eyes that turned heads on the street and a nose that was sore when I had to blow it. I thought, the lesson here is that I have to go back. The important thing is that I show how tough I am and that I can take a hard hit and get up again. And then I thought this: Rocky is just a movie. Sylvester Stallone never actually had to get punched during the making of the film. Who really cares if I go back to get hit again?

The Milk House is also featured on the Top 40 Farming Blogs of 2020.