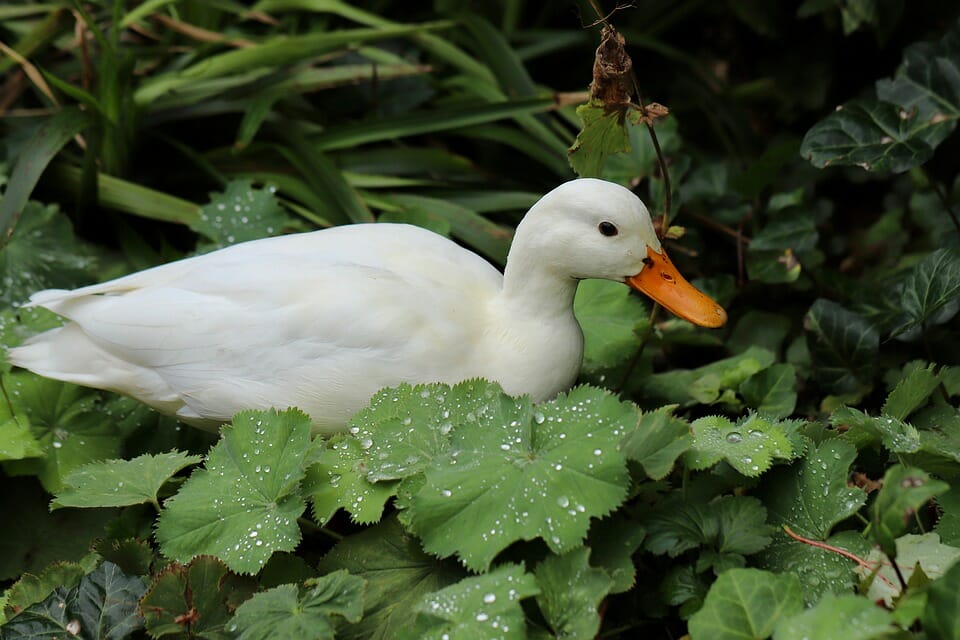 I can’t remember exactly how he had gotten here, which may be a testament to how long he was a common sight on the bank near the barn.  Since both my mother and aunt taught life sciences at local schools I can only assume that his origin is from a classroom egg incubation experiment.  If so, I’m sure that Larry and his girl Sally were brought to the farm because they had nowhere else to go, under the assumption that they would be in the belly of a coon within in days.

At first, Larry and Sally kept a close proximity to the barn, drifting in a nearby mud puddle or carefully weaving through the thick brush around it.  They had the intuition to not go into the barn, which would have carried a sentence of being sent to my German grandfather, who would have held no reservation about twisting their necks and eating them in succession.  Sometimes they spent their days slowly working their way across the dry cow pasture, their heads peaking above the tall grass.  While other ducks landed on quiet pond to swim, Larry sometimes floated in the manure lagoon.  He wasn’t pretty.  Sometimes I called him The Sh–Duck.  He looked like a duck that was living hard, and indeed he was.

Winter came and we held our breath every time we saw Larry and Sally, knowing that they weren’t likely to make it through winter, as well as that there was not much we could do, because it would be absurd to bring them into the house.  Still, Larry and Sally persisted.  Because his feathers were stained we could look out our window and see a dirty spot moving across the white snow of the dry cow pasture.

When trying to build a narrative of the small dairy farm in the past few decades, the easiest thing to say is that it hasn’t been easy.  Economies of scale garner both the financial and political advantage, while the social capital, environmental friendliness and other benefits of supporting family farms aren’t rewarded.  It’s been a story of getting by.  Our family has faced difficulties in addition to those inherent to small agriculture, from my father having to learn how to walk again after being crushed in a skidsteer to other unforeseen trials.  It wasn’t always pretty, and in fact the times when it was considered business as normal, normalcy could be defined as rather challenging circumstances.  Still, we persisted.  When we saw a duck hanging around the edge of the barn, doing the same against the odds, we rooted for him.

Larry would go on to outlive Sally, whom we would find in the goldenrod seven years later with her head missing.  Now slightly invested in his emotional well-being we got him another mate, a black female, and after several years with her and still no offspring we assumed Larry was sterile.  Then one day we emerged from the barn to find 18 ducklings floating in a mud puddle.

We eventually gave most of them away, fearful that in such a large group some would eventually fall victim to barn cats and opossums.  The remaining flock did eventually whither, first the loud ones and then the ones that wandered too far away.  Larry’s second mate disappeared too.  There were times we thought he was a goner, especially when he had a swollen leg in the heart of winter and couldn’t scurry up the bank like the others.  Still, Larry somehow remained.

Sometimes in farming one spots metaphors around him.  Maybe it’s because we see the same thing every day, with time to think.  Perhaps we unconsciously look for them.  Maybe it’s even the things we don’t expect that helps us make sense of what we’re doing.

One day my father looked out the window and noticed a white spot in the dry cow pasture that didn’t move.  I assumed he knew what it was before he got there.  At first he thought Larry was dead—his feathers were splayed out and his head laid on the ground.  Then he twitched and let out a gasping, mournful quack.

Larry was placed in the corner of the kitchen under newspapers and given a bath every day to retain the oil on his feathers.  His neck was damaged and he couldn’t lift his head.  He ate­­­ little.  Every morning we expected to find him dead, but he endured longer than anyone thought was possible.  We marveled that whatever had gotten to him couldn’t finish him off.  Then one day, when we saw that he no longer moved, we wrapped him in the newspaper and buried him in the bank.

After all the experiences we’ve had we couldn’t have foreseen going soft for a duck—even if those experiences were the cause.  Someday there will come along some other anomaly on which we can fix our attention and talk about during the idle times in the parlor, but until then the bank around the barn will be a different sight without a stained duck peaking his head over the weeds.