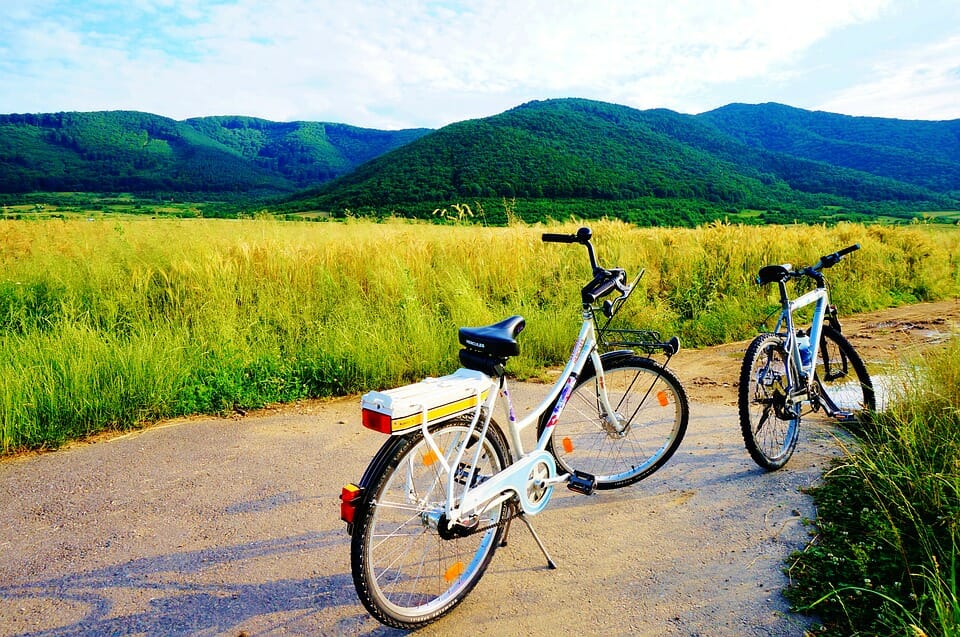 I held the phone in one hand on the table and with the other propped up my forehead.  Even though the receiver was an arm’s-length away from me I could hear Paul breathing—or imagined I could—as he waited for my answer.  Finally, I brought the phone back to my ear again.

Friends in Ireland gave me a going away party in November 2009, when, after finishing my degree there, I ran out of money and had to go home.  At 8 am, towards the end of said party, Paul and I leaned against the kitchen wall for support and came up with a sudden and brilliant plan to cycle from coast to coast in the United States.  In March of the following spring he called me on it.

From Boston to San Francisco we watched the landscape change from the seat of a bicycle and noted how the people changed with it.  All in all, I was surprised at how both kind and curious those we met were—already assuming what we were doing from the gear strapped over our back tires.  I was usually quick to point out that Paul was the real cyclist and I was the sidekick along for the adventure—both to pay homage to Paul’s expertise in the matter and to distance myself from the “culture of cycling,” which was not how I saw myself as a farmer’s son.  A friend from Iowa City asked how I reconciled the two worlds, perhaps knowing better than anyone else the contradiction there was suiting up in a silky yellow shirt.  He told me about another farm kid he knew that used to drive his dad’s pickup near the farm with a bb pistol when he was 15.  When he saw a cyclist he would point the pistol at them and tell them to get off the road.

My tire split in half in Lexington, Nebraska—a town blackened by the biblical wrath of crickets that came out of the fields to cover their streets and buildings.  After some quick research with the locals we learned that the nearest bike shop was in North Platte, 65 miles away.  The next morning I stood at the edge of the town with my thumb out and broken bicycle leaning against me.  Paul cycled past me, shaking his head, growing smaller on the flat Nebraska plain until his image eventually blended into the heat waves coming off the pavement.

An hour later I was picked up by a guy my age who worked as a renderer, and then again in the next town by a railroad worker who also rode bulls on the state rodeo circuit.  They drove dented trucks and wore stained jeans, as would most people in Nebraska and other rural parts of the country—including myself.  This time, however, I slouched in the passenger seat, tugging on my snug cycling shirt that made me noticeably self-conscious.   At least I don’t have the tight shorts, I reassured myself.

The third leg of the hitchhiking endeavor was the one that finally landed me in North Platte.  The man said he was a farmer, and looked to fit the part so fully that he could have come from a magazine cover or movie role:  clean-cut, red flannel shirt, and faded ball cap.

“Corn, alfalfa and soybeans?” I asked, having taken note of the fields I pedaled past.

I told him my family are dairy farmers in New York and that’s where I’m found when not in college in Europe or in this case, cycling across the country.  I tried to use words that would convince him that I was from a life in agriculture too, despite what my clothes and current venture might suggest.

Then he surprised me.

He told me he used to be a hippy.  When he was 19 he bummed around Europe with long hair, moving from commune to commune and sometimes sleeping in city parks.  He found work when he could and got by when he couldn’t, and wouldn’t have traded it for anything.

“And wouldn’t you know,” he said, “that the people around here are a little more conservative.  But I guess that’s okay too.”

In a dusty Ford in Nebraska came the realization that in the rigid notions of what it means to be part of agriculture there is still room for surprises, and that it’s alright to try things that may be outside of the expected experience of a farmer or farmer’s child.  It goes to reason that since running a farm is such an individual enterprise, there should be room for individuals.  Even after cycling across the country I would still side with the kid with the bb pistol and his dad’s truck, but could probably now appreciate the irony if I was the one he pointed it at.