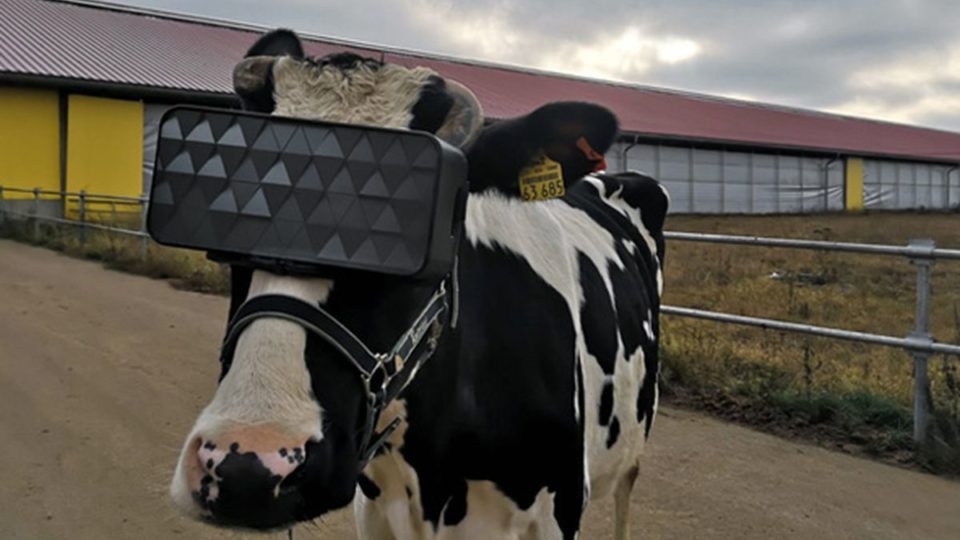 When I was young, I always got jealous when I saw that other kids had Gameboys and Nintendos. I wanted to play with all the latest gadgets and entertainment. Fortunately, and probably as my parents predicted, learning to live without those things eventually made me more immune to technology envy—which is sometimes helpful in the modern world when you see how expensive the newest phones and laptops tend to be. Recently, however, I had a bit of a slip up when I saw that there was a group of individuals that got to spend almost their whole day trying out virtual reality headsets—something I knew I would enjoy. I’m not surprised at myself for once again coveting what the cool kids had.

What I didn’t expect, however, was that these cool kids were cows.

The importance of cow comfort in maximizing milk yield is nothing new to the dairy industry. From playing music to erecting scratching posts inside the freestalls, farmers have long sought logical investments that increase production without extra labor. Russian scientists have taken it to a new level, however, designing over-sized virtual reality glasses shaped for a cow’s head. Instead of standing inside the freestalls on a gray drab day, the cows are virtually transplanted to an open field under a summer sun. They are surrounded by natural sounds and images that imitate an actual pasture, entering into, in effect, a cattle paradise. The study didn’t say what happens when the cow tries to eat the virtual grass or has to deal with the shock of the glasses coming off for milking. The VR glasses, however, have already shown to reduce overall stress and anxiety for the animal (even if not in an entirely practical way).

After developing it for almost five decades, 2016 was predicted to be the breakout year for virtual reality. It was supposed to revolutionize not only gaming technology, but the way that we looked at the world. Some thought it would eventually be part of our everyday lives, from everything from how customer service is conducted to how we social with friends and unwind at home. However, it has thus far largely remained cost prohibitive for the average person, and never really gained the momentum expected. Early flaws, such as causing eye strain or experiencing glitches, turned some people off. Before long, the buzz over VR started to die down. Four years later, many technology enthusiasts are scratching their heads and wondering what ever happened to it.

Still, virtual reality has been put to some pretty interesting uses in the last few years. Since the idea behind VR is to transport the user to new experiences, headsets have been utilized to promote empathy. This includes anything from showing children what it’s like to be bullied by peers to walking around a refugee camp and witnessing its horrific living conditions firsthand. You can even have a migraine recreated, in the event that you want to better understand what a migraine sufferer goes through. It has also been engaged in various types of therapy, from allowing those with chronic pain to enter a more pleasant atmosphere, to generating a simulated large audience to help people handle public speaking, to recreating combat scenarios to assist soldiers that suffer from PTSD. There is even a VR app that allows you to encounter getting your head cut off during the French Revolution, if you’re so inclined.

I tried a virtual headset once and admit to be taken back with it. Suddenly, I was diving in the sea and ducking every time a shark swam by me, or sitting on the edge of a mountain cliff, talking to other people with headsets on that were both right next to me and at the same time somewhere else in the world. Instead of being in a living room that I hadn’t cleaned in weeks, I was watching a movie in a Swiss villa with the mountains just outside my window. I knew it wasn’t “real,” but I was willing to suspend my skepticism and be immersed in the new environment. I, like everyone else, thought VR was going to be the next big thing. At the very least I thought I would have a headset before any cows did.

Although virtual reality is increasingly used in areas such as education and various types of training, it isn’t part of most of our daily lives. For now, anyway, we’re largely stuck with the real world, in all its dirtiness, imperfections and dullness. That means there will always be a need for an imagination, which is probably a defining part of what makes us human anyway. As for the cows in Russia, I can only imagine the disappointment when the green pastures are yanked off their heads and they’re dragged back to the milking parlor. They’ll have to come to terms with the fact that farming is something grounded in a distinct reality, and go on with their tedious days like the rest of us.

Even the cool kids don’t have it all.

This article appeared in a similar form in Progressive Dairyman. and Farm and Livestock Directory.