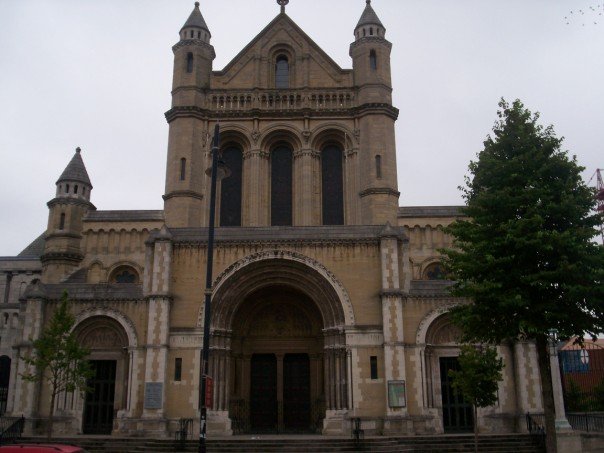 In hindsight, I could have avoided being kidnapped.

He seemed to be about the same age I was at the time. He had a shaved head, suspenders over a white shirt, and tattoos on his neck and arms. People tried to avoid him, and those that didn’t he asked, in a gruff voice, if they had a fag.

I had just arrived in Ireland for a semester abroad, a naïve country kid in the greater world for the first time. I had a few weeks before my courses started in Galway, so I took a bus to Belfast, the capital of Northern Ireland.

I told him I hadn’t started smoking yet, but that someday I will. It was a dumb joke and I don’t know why I used to think it was funny. He froze and stared at me.

He grabbed me by the collar of my shirt and pulled me across the street. Traffic screeched to a halt in front of us.

“Ryan.”  He shook my hand as he pulled me along.

He explained to me the difference between “mate” and “c—” in Ireland and said that even though in America you can’t say “c—,” in Ireland it means “mate” and if someone called you “Mate” you better knock their block off before they do the same to you. It was only nine at night on a fairly busy street, and he wasn’t much bigger than me. I could have caused a scene and gotten away, but I always had a problem with disappointing people.

“Do I sound aggressive to ya, Yank?”

“They say Belfast has an aggressive accent. How ya doing, Mate!”  He laughed and slapped me on the back with his free hand.

Suddenly he stopped again. I nearly stumbled from the momentum shift. He turned to me with a squinted eye. “You’re not a journalist, are ya?”

“I try to write fiction sometimes,” I said.

Matt shook his head and jerked me forward again. “You don’t tell no one that where I’m taking you, Yank. You’ll be dead.”

With a bit of irony the place was called Writer’s Square, in the middle of the city. In it was about thirty kids dressed in black, most of them younger than us, skateboarding, smoking pot, playing soccer, burning things and running into walls. They had piercings and tattoos and some of them Carhart jackets, eyeing me with suspicion. They were the punks of Belfast.

“Hey everyone,” Matt shouted. “I found a yank!”

They came up and circled me, sniffing my clothes. One girl said that all Americans smelled the same.

I couldn’t help but notice that Matt was probably the oldest one there. Whatever his appearance used to be, he dressed less darkly and with less tatter. Only standing next to me did he seem more “punkish.”  Maybe that was in the back of his mind when he grabbed me.

A punk asked me if I liked Spool. Before I could figure out what that was she slipped a headset over my ears. The music was loud and fast with a throaty electric guitar. I knew there was a singer, but I couldn’t figure out what he was saying.

Another kid put his arm over my shoulder and with a breath smelling of Buckfast wine told me how the Troubles were simply about nationalism and never about religion. No one is going to throw a bomb at you because you didn’t go to mass, he said. It was an excuse Britain made up for the rest of the world to keep the six counties. A group of them joined in to tell the next story, which was about a pedophile that had lived in Belfast. A group of “concerned citizens” (and here they snickered to make it clear it was them) showed up at the door and asked for his ID. Then they took him out to the shed where he had abused the girl. There they nailed his genitals to a sawhorse, dosed him petrol, dropped a match and handed him a hacksaw.

“He had a choice, you know!” Matt said, laughing into the night.

At one point they decided they were going to go to someone’s house on the edge of town. “Come on, Yank” Matt said, putting his arm around me and leading me away. Another punk stepped in front of us. “I’m sorry man,” he said, addressing me. “You’re sound and all, but it’s probably not a good idea. You’re sound, you know, but…” He used the silence to indicate that I wasn’t really one of them, made apparent by the way I looked and how I talked. And he was right.

I always wondered what happened to Matt. I was curious how much time he had left with the punks of Belfast, and what happens to any punk when he becomes an adult. Does he get a nine to five and become somebody’s neighbor? Does he get kids of his own and hides his tattoos under his shirt sleeves at a desk job somewhere? Then again, what happens to any of us when we have to move on from the person we were?

“Well, I’m off then Mate,” Matt said. He looked at me, grinned with a squinted eye, and tossed a Buckfast bottle into the night sky behind him. It shattered somewhere on the pavement. Then he walked into the darkness as well. I thought I heard him laugh and yell “See ya Yank!” before he disappeared, becoming a shadow, and then nothing at all.

getting kidnappedpunks of Belfastthe importance of not being a journalist