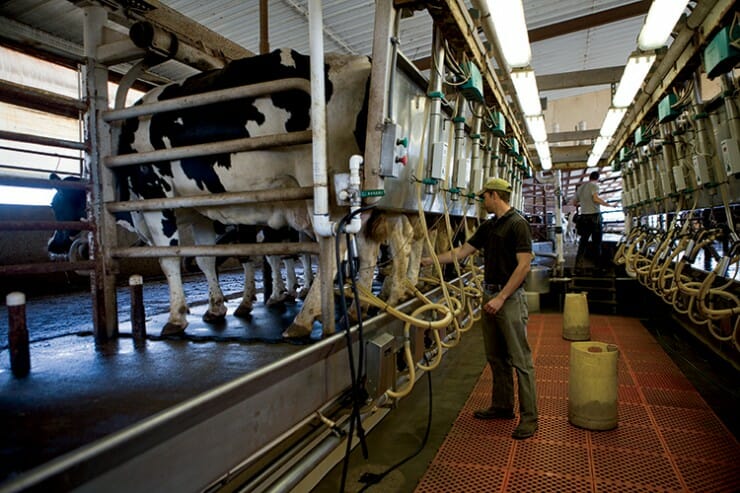 The puck was two caps from teat dip drums joined together, but the black electrical tape that covered it lent it a feeling of authenticity.  The sticks were sections of stiff plastic piping we tapped on cow’s thurls to head them towards the parlor. When the last cow on either side of us had a milker on my father and I squared off in the middle of the pit.  We lowered our shoulders, bent our knees, and planted our boots against the rubber mat that covered the floor. The goals were the legs of the steps that lead out of the pit. We eyed them behind the other. Often there was trash talk.  Then the puck would drop and our sticks would clash with such an intensity that it would send a shiver among the cows milking.

What I thought then to be a challenge of craft and athleticism I know realize to be my father pushing me backwards with his weight advantage – which was considerable since I was twelve.  Still, he must have let me net a few goals, because I kept playing. The score wouldn’t get very high before we had to take the milkers off, change the cows in the parlor, and reset the game.

Parlor hockey was relatively short-lived, owing, I suspect, to the milkers that got kicked off when someone got checked into the pipeline or celebrated a goal excessively. Still, recreation on the farm continued in other forms.  One motivation to feed the calves early was to get to play basketball with Jake and Clark. Our hired hands were identical twins with long hair and sizable builds. At that time we were using shredded newspapers to bed the freestalls.  The shop, where the hoop was nailed, was mostly dominated by the large rectangular bales of printed paper. Sometimes we couldn’t see our shoes under the chaff and the heavy dust made it seem like the basket floated above us in the haze. We played between the stacks of bales.  What I thought then was a test of fundamentals and good rebounding I now recall as them using their weight to push me backwards. The rafters were low, meaning our shots had to be flat. Eventually I think there was extra points given for jumpers made behind the bales. Every once in a while I had to climb up them to fetch a stray rebound.  Still, I must have won a few times, because I kept playing.

During that age my classmates, few of them the children of farmers, would wander around town in hope of finding something to do.  It reinforced the difference between us, and in the larger context, the peculiar case of the people that milk cows. For those with a farm, life happens around it.  It has no choice. It’s where they find themselves most of their waking moments. It’s a demanding venture, and the things they do to be human – laugh, ponder, eat lunch, get frustrated, exercise, break down, relax, make jokes, play hockey – often happen in the framework of being farmers.  Many of my best (and worst) ideas have come while forking hay to heifers. Visitors are often received in the milk house, parlor, or the field. Instead of reclining in an armchair, the NCAA tournament is followed on the dusty radios around the barn and in the tractors. There are also plenty of times when the farm gets in the way.  Every family has taken turns missing picnics because the heifers got out or skipping a birthday party because of a backwards calving. For better or worse, the farm is the anchor on which the majority of life happens.

Although we saw each other most of the day, the parlor is where our family talked – really talked. Perhaps it was the confinement in the small space of the pit, the communal nature of milking together, or something we got used to while trying to entertain ourselves between groups of cows.  Whatever it was, the pulsation of the milkers seemed necessary in order to have the most important conversations. Every time I announced which college I was going to, where I’d be living next year, who I was dating, or if I got a story or poem published, the news was given while we all smelled like iodine and manure.  The parlor was the place where the things we knew were analyzed and weighed: social trends, the NFL, politics, or the picnic we attended that day – from who was there to the potato salad. All theories of life were first tested in the pit. The morning and night milkings were not only the bookends between which each day happened, but for our development as people as well.  Without the parlor and the obligation to milk twice a day we still would have made it as family, but I suspect we would have been different.

For example, not as good at parlor hockey.