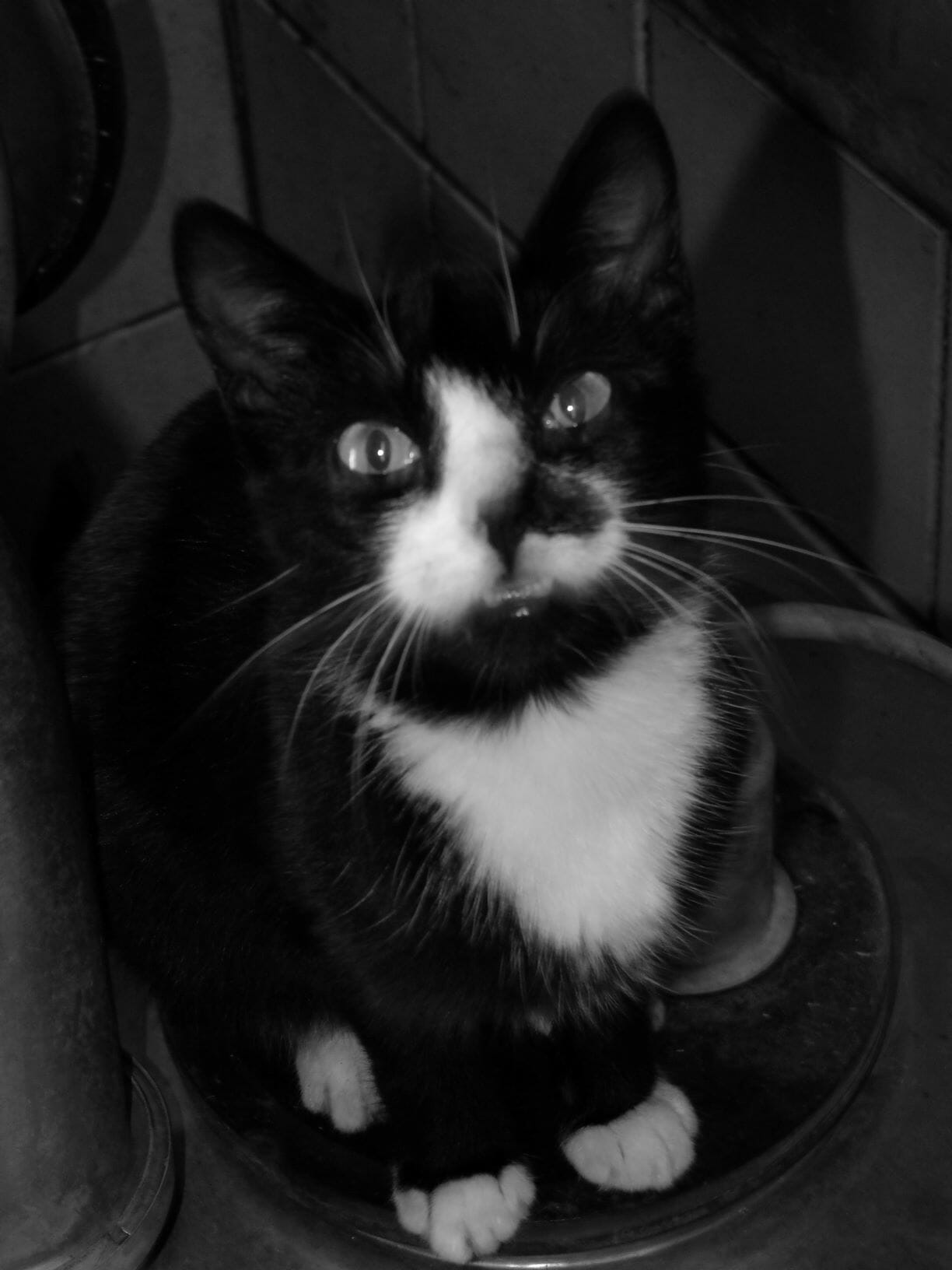 My father, in spite of himself, scratched the back of the cat’s neck. The cat lifted his head and looked up to him. He followed the trajectory of my father’s hand with blank eyes as it slipped back into the pocket of his jeans.

“That’s one messed up cat,” my father said.

It was one of the days that we could hear the big trucks bounce up the hill next to us, despite the loud pulsations of the milkers. They belonged to the large operation that bought out all the other small farms in the area. Corn silage flew out of the back of their dump trucks as they raced down the same dirt roads we used to ride horses on.

Months before, Ti-Ti stumbled into the parlor as a small, snotty kitten. He stopped at the edge of the pit to tuck his feet under him, curl his tail around his body, and sneeze. I waited for my father to take the hose to him. The kitten violated the sanctity of the milking parlor where cats were not allowed for the purposes of biosecurity. Sometimes, near the end of the milking they strutted back and forth in front of the doorway with their tails up, aware that they may soon be fed the milk of a treated cow, but knowing better than to cross the threshold onto the concrete floor. This sickly kitten, however, showed no regard to the natural order of things and I waited uncomfortably for his painful education.

I do not remember if my father held the hose handle in his hand and eventually dropped it, letting it dangle from the top pipeline, or if he showed any sign of the thought process in his mind.

The kitten was named Ti-Ti. Possibly, it was a degeneration of the sound “kitty-kitty,” or perhaps some other typical instantaneous reasoning that lends to barn cats being named in a way that isn’t very reflective or thought out. Ti- Ti was an outcast among the other cats and was seldom let near the milk dish. His small frame trembled as he walked up and down the grates between dirty hooves. Once in a while my father stroked Ti-Ti’s back when the cat tiptoed by.

Sometimes Ti-Ti was stepped on and would let out a howl, but instead of running out of the parlor he walked to the end of the pit, tucked his legs under him, and pinned his ears back. His feet were always wet and matted because, unlike other cats, he was not bothered by treading through manure. He didn’t show any reaction to a piece of straw dragged across his feet, nor any other poking or rough play. His face carried on it a dull expression, that if he were a human, could suggest the absence of thought. Once, I caught my father pulling dry dog food out of his pocket and placing it next to Ti-Ti.

“What?” he said without being asked. “He’s not going to make it anyway.”

The easiest thing to assume was that my father was getting old. It would be conceivable that years of farming and milking twice every twenty four hours of his life had worn him down so that he would give in one day, finally, to an innocent kitten stumbling into the parlor. “Yes, he’s getting soft,” I told my mother, when we teased him for his affection. But I never believed that was the reason my father hoped the cat would live. Ti-Ti was unwilling to recognize that if all other barn cats did not step into the parlor that it goes to reason that he shouldn’t either. It could have been pity that led the 50 year-old man to squirt penicillin in the sickly kitten’s eyes, or it could have been respect. Maybe they were meant to be kindred spirits from the start.

Ti-Ti is often kicked by the cows in the parlor and more times than not his coat is tangled with burdocks, but he has survived against the odds. He usually sits on top of the metal steps, staring into space for no apparent reason. Sometimes, when I put the milkers on each cow in line I stop at the end and linger enough to scratch Ti-Ti’s neck and allow him to raise his head to my hand, knowing full well that I may never make sense of him.

This article appeared in a similar form in Progressive Dairyman in 2011.