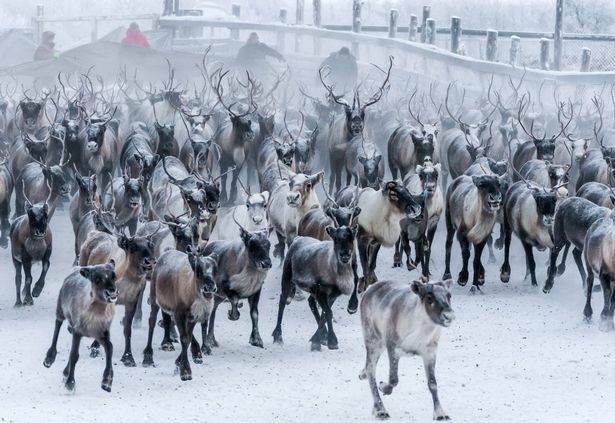 In an age of alternative facts, spin doctors and stilted media outlets, it is up to the individual to question the information he is given.  It is no longer enough to be told something or to see it on the television.  We have to think for ourselves.  We have to ask the hard questions.  That’s why I’m calling out Christmas.

Ever since the 1930s when Coca Cola gave us this red-suited obese figure with strange ideas regarding home privacy, a few things haven’t added up.  Many have already pointed to the obvious: How does he get down the chimney? How does he have time to show up at every local mall? How has he not contracted diabetes from all those cookies?  Still, there’s one question that bothers me most of all.  Where does he get these flying reindeer?

It is by considering this last question and applying a process of logical deduction that I have stumbled upon a startling discovery: there are farmers on the North Pole.  It is my understanding that a typical reindeer doesn’t fly (and for the record, I have a degree in Bioscience).  This is a trait it has obviously been bred for.  Also, for an animal to perform human-required labor such as pulling a sled it must have went through a process of domestication, the same as their cousins the ox and the horse.  This is the work of good animal husbandry.  How come we never hear about the people responsible for all this hard toil? Yes, it appears that even on the farthest reaches of the planet there are misunderstood and underappreciated farmers.

I’m just going to come out and say that the story of Rudolph feels a little too Hollywood to be true (I know that Americans love their underdog/underdeer stories, but still).  I’d rather say that the red nose (if not a symptom of disease) is the product a solid line breeding program, resulting from decisions made after hours of flipping through the herd book.  Even all the “Prancers” and “Vixens” could not be merely happenstance.  Although the public may not like to acknowledge it, many of the reindeer who did not make the cut would have to be culled, presumably sent south to Iceland.  (I know this because the island has a large national herd, even though the animal isn’t native.)  I have driven by some of them and saw them hang their heads because they, too, knew that they weren’t fit to pull anybody’s sled.

Given the physical condition of Santa Claus, I’m willing to guess that he hasn’t put much sweat into training the reindeer himself.  In fact, I wouldn’t be at all surprised if 4-H kids have to make a trip to the North Pole after the fall showing season to work on the deer themselves.  A reindeer is a brutish animal by nature, far out of the scope for elves to handle.  Instead, it would take someone who has broke a two-year-old Swiss to lead to be able to tame them to the harness and teach them to obey directions.  The night of delivering presents would be lost if all the deer planted their feet and pulled against the reigns.  Unfortunately, it is unlikely that most county programs are progressive enough to give 4-H project credit to reindeer work.  The youth might be little compensated for the all the calf chores they’re missing back home.

Even before coming to recognize the agriculture on the North Pole, it must be pointed out that Santa hasn’t worked very hard to be a friend of the farmer.  Why is he always seen drinking Coca Cola instead of milk?  Surely he could have worked something out with the California Milk Board.  If he was truly concerned with the long-term happiness of children he wouldn’t he trying to rot out their teeth.  (I suspect he’s in cahoots with the Dentistry Union.)  Imagine if he asked for the occasional burger instead of cookies.  Beef consumption would skyrocket on Christmas Eve, and Herefords and cull cows would fetch a nice December price.  (And surely John Deere must have already reached out to him, given their slogan.)  Nonetheless, instead of promoting agriculture, he gives all credit for the local economy to the elves.

Forget Tiny Tim.  It’s going to be a sad Christmas for all the rural boys and girls when they realize that Santa Claus isn’t Farm Proud.  Let’s just hope that the Easter Bunny is more sympathetic to the agricultural cause.