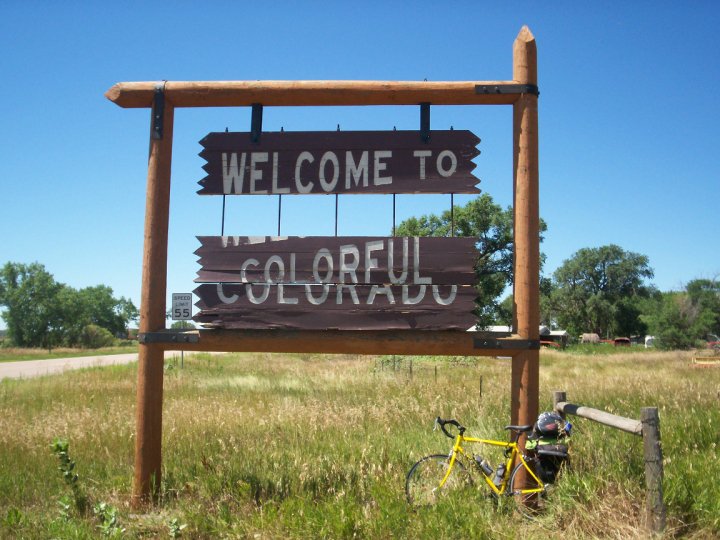 He was a man in his fifties, his long braids swinging quietly between his shoulder blades as he pedaled. He moved patiently on an old white bicycle with a ratty flannel jacket and other clothes like it draped over the handle bars and strapped down on the back. He, too, must have just coasted down the Rocky Mountains, but he showed no excitement nor signs of the thrill. Two dusty rims hung off the bundle that spilled over on both sides of him. His face was deeply creased, weathered like a graying board left in a pile behind the shed. The front of his bike wavered, either from its weight or his fatigue.

“Where you heading?”  I asked from behind him.

He looked me over and then turned back to the road, his elbows resting on the handle bars. He allowed the creaking sounds of our bicycles to pass between us before he finally answered.

The pace he biked showed no urgency, as if nothing about his destination tempted him and what was behind him couldn’t pull him back. His hands were large, knotty masses knuckled over the handlebars. His bundle seemed to heave with him. He caught me looking over again.

“Her frame is ninety-eight years old. The rest, by now, is made from scrap parts along the way.”

He was a large man, and it seemed awkward for him to be bent over on something as simple as a bicycle. He wore work boots, with the ends of his jeans hanging sloppily over them. His name was David.

“Myself and a friend are riding from Boston to San Francisco.”

When I was twelve I started reading westerns. Men roamed in them from one place to the next for no particular reason, throwing themselves into danger to help widows or small towns from outlaw gangs. The men were reserved, didn’t seem to have much angst about dying, and didn’t complain when they took a bullet in the leg. At the end of the book they would have saved the day, no matter how outgunned they were. They were always asked to stay, by a blushing woman or a thankful sheriff, but they never did. They tipped their hat and rode away, with something beautiful and tragic about being your own man.

David mumbled that it was a long story, looking into the vacant street in front of us and apparently referring to his own life. I had found him on the steps of a café in Saratoga, Wyoming, drinking coffee from a paper cup. He said he buried his father and then said the word “depression.”  I wasn’t sure if that was what took his father or turned David into a nomad, although perhaps it didn’t matter.

“Do you know the picture of the slumping Indian?” he asked. “It’s not right. It shows him defeated.”

I stared at him in silence. A car might have driven by or others might have passed us on the steps on their way to the restaurant. But then I saw it: broad nose, flat face, and straight graying hair. David was half Indian. He also talked about the picture of the Indian woman and the full moon, and how that was even worse. He asked me if I knew the significance of the full moon. “Of course,” I lied.

I had never met a Native American. My hometown, Canaseraga, is supposedly an Iroquois name, but all that remains of that past are the broken arrowheads that sometimes wash onto the creek banks. It is my understanding that back then when a man had to deal with the things inside him he could jump on a horse and drift from town to town as his spirit pleased. But David, born out of time, had only a bicycle.

“A few days ago I met a man that let me split a pile of wood. I get work where I can get it,” he said. “I’ve seen strange animals no one has heard of. Lizards that walked on two legs and rodents shaped like giraffes. I once met a girl whose science teacher told her that the dinosaurs are coming back—first as small creatures. Then some say the Egyptians left small dogs in North America.”

He told about riding on the interstate in LA and suddenly being surrounded by a bike cop, a car patrol and a helicopter. He talked about the aggression of ants in different parts of the country, and the aggression of people. He said that he was a little bit crazy, and before I could say it myself, he said that maybe we all are.

I’m from the east. We don’t have cowboy here. We have Facebook and Twitter, and such things of a changing world that make me wonder how many cowboys are left. I know there are those in rodeos and some that work on ranches, but these aren’t the people I read about. These men drifted through the countryside, having nothing and asking for nothing. They couldn’t be held to one place, and they had nowhere to go. I would be tempted to think that such men only existed in stories, except that I could picture one now: pedaling slowly through a small mountain town with his head down, his bicycle swaying beneath him.