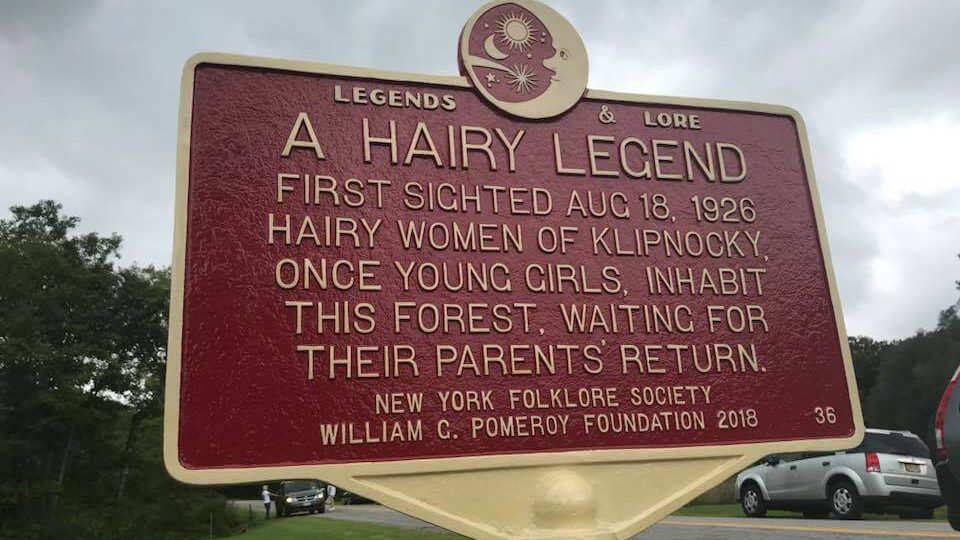 There are various theories on how they came about, depending on what coffee machine in Canaseraga you were leaning on and what old-timer you were talking to. Some would say they’re hippies who had moved into the woods and gone native. Others think they’re offspring of Big Foot. One tale has it that there were six sisters whose parents died in a car crash the same night their house burned down. Knowing not what else to do, they ran into the forest to stay. Nonetheless, for those of us who are younger, the Hairy Women of Klipnocky have just always been there.

Klipnocky is a 2,600 hundred acre hinterland of state forest that stretches through a rural community and borders our farm. The Hairy Women have been known to be a mischievous presence in the woods since the 60s, when Archie Miller first hurried breathlessly into town to describe the animal-like females he had seen, allegedly the first one to encounter them. Since then, they have played tricks on hunters that eventually left the woods baffled as to what they had witnessed or who had run away with their hat. Farmers sometimes caught glimpses of them while plowing or baling second-cutting, the hunched shadows slinking through trees. While other communities shrug their shoulders at the events they can’t explain, the people of Canaseraga know such things to be the work of the Hairy Women of Klipnocky.

I have been told that before I was born there was a sign on our land that read “Hairy Women of Klipnocky Crossing.”  It would seem as if our family always had a part in their history.

For a brief tenure, the town managed to maintain a small monthly flier called The Canaseraga Creek Crier. The summer before I went into ninth grade it called for stories about the Hairy Women. I’m not sure what made me try to write one, nor did I expect to spend the whole summer writing it. Nonetheless, what resulted was a ten-part series that ran through most of the year. The response was unexpected. The Crier had a sudden revival in interest as local residents checked their mailboxes for the next installment and those who had let their free subscriptions go derelict suddenly demanded to receive it again. People I did know sought me out to comment on it. I went from “The Dennis Boy” to “that Dennis boy who writes about the Hairy Women,” which was an appreciable jump up in status for a fourteen year-old. Even more exciting was the renewed interest in the Hairy Women themselves. Suddenly, people talked about them again, everyone having something to share—from personal experiences to what their grandparents had told them. Since then, the local Fall Harvest Festival features a Hairy Women Look-Alike contest as its core entertainment.

Writing that story had a lasting effect on me. I continued to pursue creative writing, and now teach it at a university overseas. Nonetheless, if I was to read it again I’m sure I’d find that it was no better than any other kid that age could write. Instead, its impact came from a town that saw itself in writing. Regardless of the quality, it was a story about them, and it meant something.

The myth of the Hairy Women of Klipnocky has been passed around so much that I have begun to wonder if, in some ways, they have begun to exist. Between the stories of old men and the enthusiasm of the contestants at the Harvest Festival, it is obvious they have come to mean various things to many people. For me, not only are they weaved into an upbringing in a rural community and the cultural heritage of where I live, but embody the value of trying to tell someone’s story in earnest. It’s a lesson I try to carry with me. Sometimes people ask me what I write about and then laugh when I say milking cows. Nonetheless, I believe that the story of the dairy farmer is one that needs to be told. At present, I have begun to search for an agent to help place a novel about a farming family, as well as continue to explore what it means to be a part of agriculture in other forms of literature. I keep writing with the hope that someday I’ll get it right enough so that someone, somewhere might see themselves in it. In the meantime, I continue as someone who can’t help but to look into in the woods, half-expecting to see a dark figure looking back at him.

This article appeared in a similar form in Progressive Dairyman. Further information on the Hairy Women of Klipnocky can be found here.