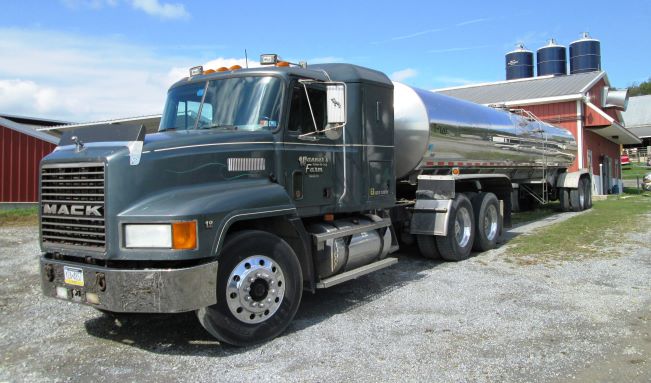 When my cousin Jade was born with pretty red locks to brunette parents the first question asked was regarding the color the milkman’s hair. It’s not an uncommon joke by any means, nor is it exclusive to farmers. Nonetheless, I suspect most of the general population see’s in their mind’s eye a clean-cut man in a white uniform leaving bottles of milk on the doorstep. The actual job of a milkman, however, is less glamorous.

Farmers always have an opinion of their milkmen—it is a relationship that is seldom ambiguous. A wise producer treats his milkmen well, knowing that when it comes down to it, the milkman has the power to swing the weights 100 pounds either way. My grandfather always tried to get his brother to pick up the check at a restaurant, suggesting that my uncle’s farm got some of his milk every pickup.

In addition to hauling the milk, the milkman carries out another functional service that he doesn’t get paid for. He is often the most tangible link between farmers in the area, and the way they find out about each other. The milkman has an unworldly skill of becoming privy to information that a farmer would never tell another producer if they ran into each other at a show or club sale—who had a tractor catch on fire, who didn’t have their corn in yet, who had pneumonia run through their herd. Sometimes, for better or worse, a conversation with a milkman is a way of feeling better because it reminds us that other people have problems too.

We had a good milkman named Hayes Newland. He was quiet and friendly, with graying hair pinned down by a dusty ball cap. He read the weights fairly and consistently. While most milkmen came into the parlor to push us if we were running behind in the morning, Hayes sat in his truck patiently, reading the newspaper left in the milk house or taking a nap. If he did walk through the parlor door it was just to chat, during which he would rest his elbow on a metal pipe somewhere and nod as he listened. He moved stiffly, with great discomfort in his knees while they deteriorated—something I never heard him complain about. Finally, it came to the point that he needed them replaced to continue to drive truck. The surgery had already been scheduled when I left again for overseas.

I was surprised to find out one afternoon while skyping with my parents that Hayes had passed away at the age of 60. His wife, Cheryl, explained that he had loved hauling milk and had done so for more than 30 years. He first worked at a factory out of high school, but knew that driving truck was what he wanted to do. Several years later he enrolled in a school in New Jersey that taught and certified drivers, and after graduation took up the milk truck because, above all, he didn’t want to be away from his family. While healing from knee surgery he experienced trouble with his vision, and after having his retina re-attached he suffered a fatal aneurism. The calling hours occurred the same day as a freak blizzard. The funeral parlor was still full, and many more had wanted to attend.

Although little about those who make the milk is understood by the broader population, there is still a lingering respect and appreciation , even if it gets more generalized with each generation. Still, those who haul the milk are likely less recognized by the same people. It may only be the farmers and spouses themselves that understand the value of a good milkman. The small talk, occasional cookies, and this column does little to embody a man’s contribution to his work or the field of agriculture. Nonetheless, the dairy industry is extensive in its structure and requires the dedication and goodwill of many kinds of people to keep it working. Perhaps the fact that milkmen are one of the few people who show up without looking for money makes their company more venerable. This moment is a humble and inadequate thank-you to Hayes—a little late, admittedly, and to all the people like him that make the farmer’s day that much better.

Rest peacefully, Hayes. We wish you had another 30 years.