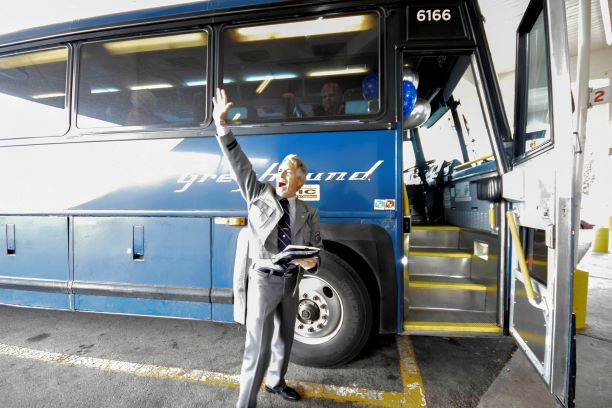 He shifted on his feet as he pleaded. He made a show of impatiently looking back towards the ticket counter. People passed by us lugging their baggage with sleep-dazed faces. I knew he didn’t lose his bus ticket.

But I was also young and had left the farm for the first time only hours ago. I was not used to people insisting on things they had no right to. I pulled out my wallet and held out a twenty dollar bill to show that I couldn’t help him because that was all I had.

“That will do,” he said as he grabbed it and disappeared. All the people waiting for the next bus shook their heads at me.

I chose to go from home in New York State to university in Iowa with Greyhound because it was cheap. My hometown was rural, homogenous, and uneventful. When there was talk of diversity it was naming the redheads that we knew. Iowa, both the university and the state, offers a statistically small subset of people who are not white and Midwestern. I did not expect that getting between these two points would take me through a roving microcosm of the American working class.

The trip takes 1,000 miles, four transfers, and 24 hours. It pulls at the edges of the mind so that sanity is a slippery concept. It is a varied crowd that makes journeys like this, themselves equally tough to match. I would go Greyhound many times in my youth and generally it was the same people riding with me: minorities and weathered Caucasian men of middle-age, usually an Amish family, a pair of foreign girls touring the country, one member of the military with PTSD and one or two inmates released that day. It was the first time I was minority myself due to my appearance—and as a result often the target of the lost bus ticket scam.

When one “goes Greyhound” they are trading in the notion of comfort for the possibility that anything can happen. I once sat behind three women who were random strangers discussing the best individual theft plans for each major department store. One trip I befriended a Cherokee woman who fed me whisky and pancakes. Another time a man in a top hat tried to touch me inappropriately. One bus driver crashed into a hotel and kept going, running a few cars off the road in the process. Once the route was delayed because a man on the bus tried to steal a hotdog from the convenience store we stopped at and we had to wait for the cops to take him away. Starting off once there was a bad snow storm in Iowa City and it didn’t look like the bus was going to run that day. Then a seemingly random man jumped in the driver’s seat, rolled up his sleeves, and drove us past all the overturned semis along the road.

Once I even came away with new electronics. After getting on my first stop a conversation sprang up between me and the man next to me, who wore loose clothing and over twenty gold chains on his neck. I told him I was going to visit my old college in Iowa and then return to Ireland, where I had been living.

“I-re-land,” he said, pronouncing each syllable with emphasis. “How do you get there?”

I explained the common airlines and airports I would fly from. Then I mentioned that once you’re in Europe it’s easy to get from country to country.

“Wait, wait, wait. Ireland is in Europe? You’ve been to Eur-ope?”

On a whim I dug through my pocket. Among a handful of American coins was three eurocents. I handed it to him.

“Wow, man. This money is from Eur-ope? Wait till I tell my friends I got money from Eur-ope. You know what? You give me something, I give you something.”

He handed me a stolen mp3 player.

I rode the Greyhound even when I could afford to fly. More times than not it was a hard trip, but I wanted to prove that I was still hard enough to make it. I discovered how to keep a crazy look on my face to prevent from being approached for scams. I learned how to get by for 24 hours in an ecosystem that was a little rougher than the one I was used to. As a man I asked to look after my bags as I went to the bathroom said to me while pointing his finger: “Trust no one!…but yeah, I’ll watch your bags for you.”  The Greyhound bus was the hard truth of the world, and it made me tougher learning it. I knew a little more about life every time I rode it. I became savvier than those that take planes. In the end The Big Dog took me from a naïve farmer’s son to a person that you weren’t going to get eleven dollars from.

This article appeared in a similar form in Progressive Dairyman in 2016.