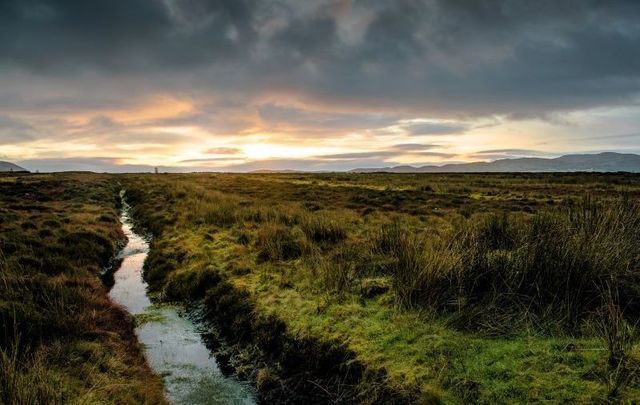 I know when my father has done something wrong because there’s no butter in the fridge. When my mother takes it away she says it’s for his health, but I can usually sense something punitive in the action. It would end up in a closet or the back of the freezer. I would find the butter in the bathroom drawer and know that there was an argument. If my mother felt offended she would hit him back where it hurts.

“It’s not good for you,” she always says.

“But it’s butter!” he replies.

My Italian girlfriend puts olive oil on everything. Bread, rice, potatoes—everything. She never uses butter. “That’s ridiculous,” I tell her. The battle lines are clearly drawn. A bottle of Bertoli on her side of the table, a block of Kerry Gold on mine.

“Olive oil is from my people,” she says.

Last year an Irishman cutting turf from a bog in County Meath uncovered a wooden casket several feet under the ground. Instead of relics left by early monks or treasure from the Viking days the container held a 22 pound block of butter. It was later estimated to be several thousand years old, but still smelled (and apparently tasted) like butter.

The discovery of bog butter is a fairly common phenomenon in Ireland. In 2013, 100 pounds was found in a wooden keg dating back 5,000 years, and in 2009 they uncovered 77 pounds that were at least 3,000 years old. The Irish have been digging up bog butter for at least a couple of centuries, as an 1892 article from the Journal of the Royal Society of Antiquaries of Ireland states that a reverend discovered a sample that “still retains the marks of the hand and fingers of the ancient dame who pressed it into its present shape.”

The bogs are anaerobic acidic environments that have collected biomass from thousands of years. The Irish cut the bog into small blocks (traditionally by hand, but now mostly with machines), lay them out to dry, and then burn them for heat. Although the “turf” looks like sticks of dirt, it holds a flame in the same way as wood. The conditions of the bog often preserve the organic material lost in them, and several bodies thousands of years old have been found with hair and skin still intact. Nonetheless, and luckily for turfcutters, it’s more common to find butter than bodies.

No one can be exactly sure why people of the ancient past buried kegs of butter, although the most likely explanation is to use it as a method of preservation. Without the benefit of refrigeration, the bog was the mostly likely place to keep a substance cool, and the anaerobic environment helped create a seal against bacteria and mold. The recovered samples are still edible, after thousands of years. Several people have sampled it and reported that it tastes (at least vaguely) as butter should.

The butter found in the bogs may have been forgotten, or more likely, its owners had succumbed to invaders or other pestilence. Some think that putting the butter in the bog was a way to hide it from aggressors, as it would likely have been a valued commodity. Some civilizations, such as Norway in the Middle Ages, used butter as a currency to pay taxes or rent. Still, there’s another theory that has been left largely unexamined: the wife was hiding it from her husband.

For a long time scientists were skeptical that bog butter was actually butter, some proffering that they were the remains of carcasses putrefied into a waxy substance. In 2002 Scottish scientists tested nine samples and found that six of them were dairy products, while three of them were composed of lard and animal fats. Bog butter is seen as particularly important to the field of archelogy, because such samples are the largest deposits of organic material they have available to study. Usually when we study a past civilization we’re left with pieces of their writing or artwork to understand them by. It’s fitting that ancient dairy farmers get credit for their efforts too.

Last week I caught my girlfriend trying to throw out a stick of butter. I stopped her immediately.

“But it’s past its expiration date,” she said. “How do you know it’s still good?”