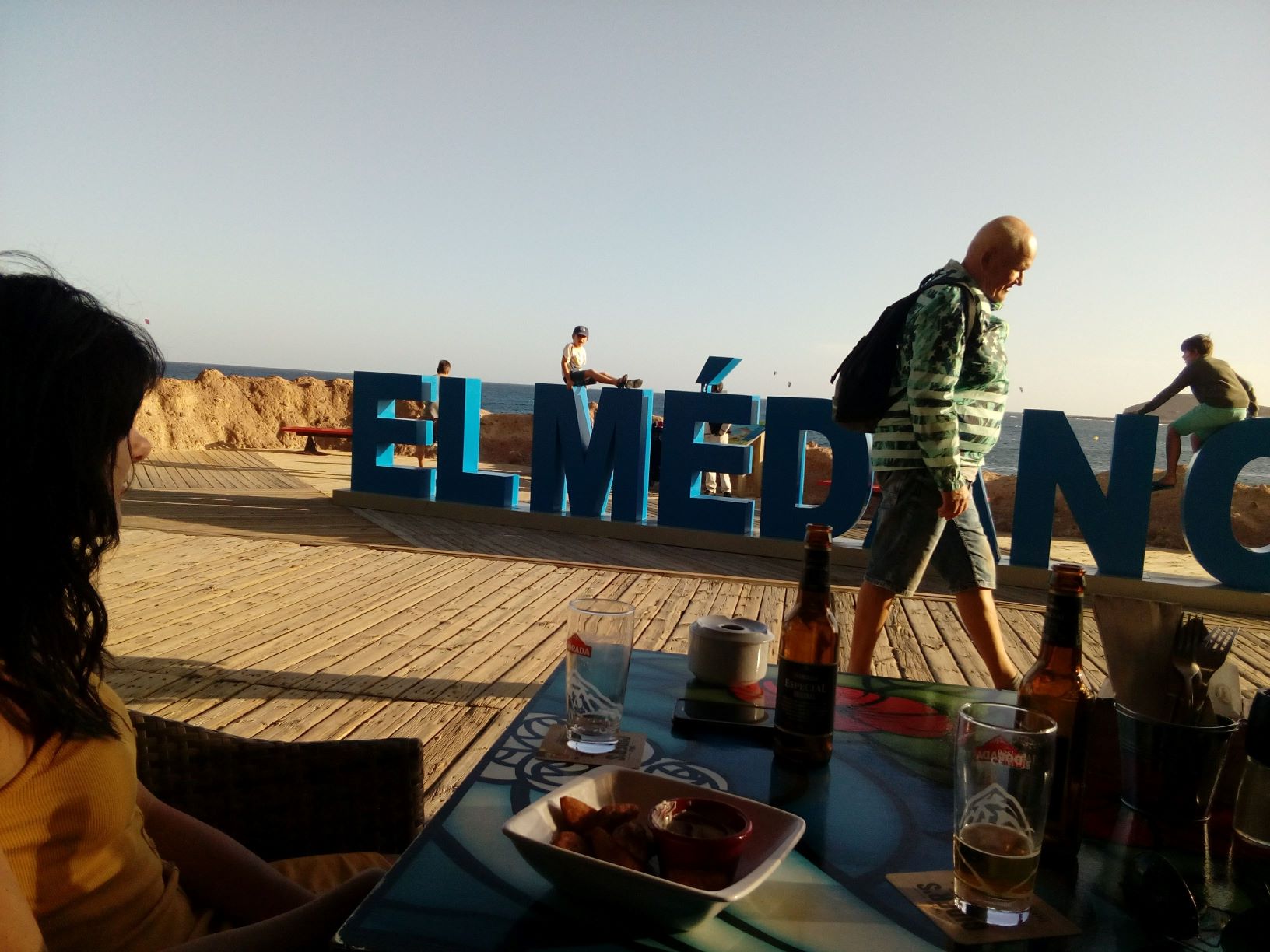 “Is he still staring at us?” my girlfriend asked.

I glanced over my shoulder. An old man stood in the glaring sun, nude. His small chest was caved-in and bent forward, his legs spindly and knobby. He was tanned to the color of leather and wrinkled—every part of him. The fact that I was looking back at him didn’t seem to faze him, as if he found something revolting about me. I turned back again.

In lieu of Christmas presents, my girlfriend and I decided to go to Tenerife, one of the Canary Islands owned by Spain off the coast of Morocco. We assured ourselves that although it was tacky and touristy and not the type of vacation we would normally take, it was admissible under the circumstances. We had spent over three years in the West of Ireland and were desperate for sun. Flights were only $50 each way for the 2,000-mile journey. The temperature there was still in the 80s.

We packed the sunscreen as fast as we could.

Looking back, I should have paid more attention to the passenger demographics on the plane. The fact that the back of the heads I stared at during the four-hour flight had thinning white hair or a bouffant style should have registered, but my brain was incredibly starved of vitamin D. That, and here’s the thing about old people: They’re much easier to miss when they have clothes on.

We didn’t have any illusions of an authentic cultural experience in Tenerife. We understood it for what it was—a small sandy island turned tourist trap for citizens of cloudy countries—and at this point in our Irish residency we were OK with that. What we did not expect was the island to be colonized entirely by old British couples. They filled the restaurants, lounged around the pools, and even worked in the shops. You could look all the way to the African coast before you would see someone under 60. The first bar we went to was overtaken by elder patrons playing “Sticky 13”—which apparently was trying to guess if the next card in the deck would be lower or higher than the previous one—and hopping and hollering every time someone got it right. Somehow we had found ourselves in the world’s largest retirement home.

The third day of the trip we drove to El Médano to try our luck on the beach there. It was a relaxed, hippy-ish town, and not the type of place you’d expect to see the older generation. There was little doubt how El Médano became the alleged windsurfing capital of the world, as the wind picked up the sand along the shore and pelted us in the face. My girlfriend pointed to a rock ledge at the far end of the beach and suggested we take refuge there. I kept my head down to shield my eyes, focusing on putting one foot in front of the other.

We turned the corner of the cliff and descended some small wooden steps. The relief from the wind was immediate. It was suddenly much warmer and the waves were not so menacing. We took a moment to rub the grit out of our eyes. When we opened them, however, it was to the exposed genitals of the senior citizens looking at us.

If there is a correct reaction to such circumstances, it is difficult to have it in the heat of the moment. When men stand next to each other in a urinal it is common etiquette to keep your eyes down or to look at the opposite wall. There was nowhere to look at that beach. Spread along the sand, shaded by the rocks, strolling in the water were people that looked like my grandmother but that did not wear clothes. One old couple passed us and smiled. I made a concerted effort to only look at their faces. Bicycle shorts make me feel uncomfortable. I was not ready for this loss of innocence.

My girlfriend pointed to the steps and the redundant words scratched into them: Nudists Only.

“There are two options,” she said.

She tried to read my face while I tried to read hers. This was the only part of the beach that was comfortable and out of the wind, but it came with conditions. I have come to the point in my life where I have been able to achieve a secondary level of body confidence that comes from having fought and lost against a growing belly and thinning hair, and from the resignation of the fact that this part of my life isn’t about turning heads anyway. Nor would I consider myself an overly jealous man and be opposed to my girlfriend taking off her clothes, if that was something she wanted to do. Still, although not underwear models, I couldn’t help but feel that we were bringing more to the table than the rest. And then, too, there’s the logistics of later finding sand in new places.

We settled for a natural sandbar below a small wooden bridge. It was near—but outside off—the steps that seemed to officially mark off the nudist area. It was cramped and we had to lay on hard, uneven rocks as the tide crept closer, but that was the compromise we made. We saw the only other young couple on the island there in the sandbar, and although it made for a crowded space, it helped validate the decision. Still, for reasons I remain unsure of, our presence would occasionally rouse an old naked man from his towel and bring him over to stare at us.

For days after coming home it was hard to close my eyes and not see what I saw on the El Médano beach. It was a while before my girlfriend and I could bring ourselves to speak of it. When we did, we came to the same conclusion: next year let’s just get a UV lamp.